WATER VOLE CRISIS – but hope for the future?

Water Vole sightings on Brook Meadow declined dramatically from a high point in 2012 to a point where we had no Water Vole sightings at all in 2017 and 2018.  However, surveys  carried out in July and October 2019 by Sarah Hughes and volunteers indicates they are back!  So there’s hope for the future!

MONDAY OCTOBER 7 – 2019 – Water Vole survey
Report by Brian Fellows
I met up with Dan Mortimer, Terry Lay and Sarah Hughes at the tool store on the Seagull Lane patch at 9am as previously arranged for the Water Vole survey. David Minns was also present. I took a group photo. 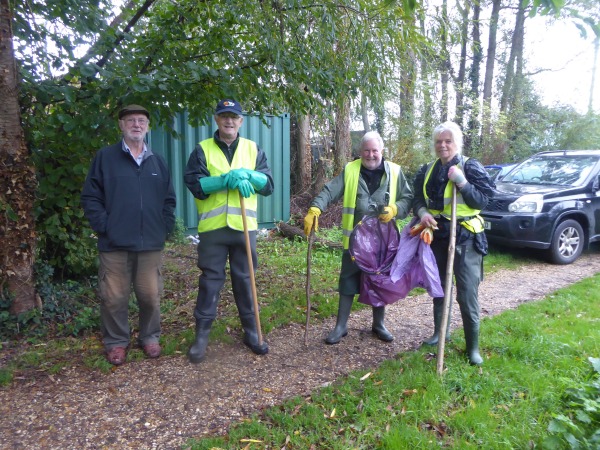 Sarah decided to survey the north river from the north bridge to the railway tunnel. Dan and Terry joined her in the river while David and I followed on the river path. 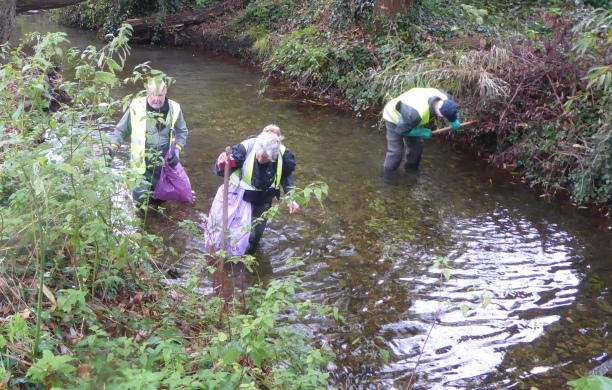 It was really interesting to see Sarah working methodically, probing and smelling. She found several burrows, foot prints and a bit of poo. Sarah thought the area on the bend was a beautiful area for voles with copious vegetation and good banks. Dan and Terry picked up litter as they went. 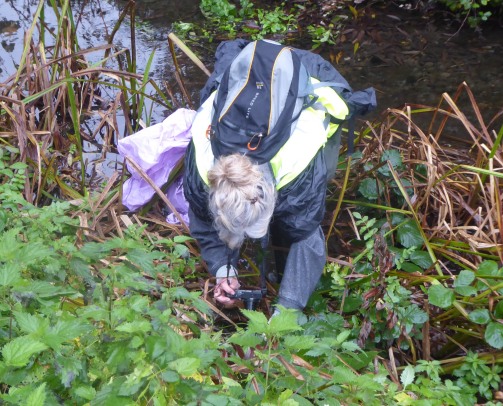 Sarah’s colleague Alison joined us later, she’s an entomologist who I met on the Brook Meadow walk. All four of them ventured into the tunnel under the railway where Sarah and Alison checked out spiders. 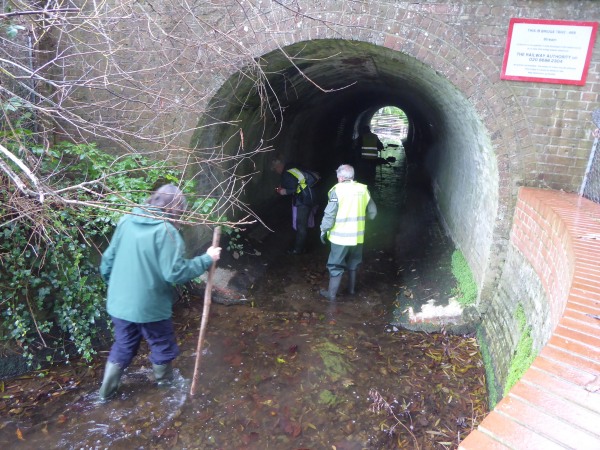 We went over to the Lumley Stream which Sarah was most excited about, the banks being soft and ideal for Water Voles, but really needs more vegetation. Dan will try some Common Reed planting. 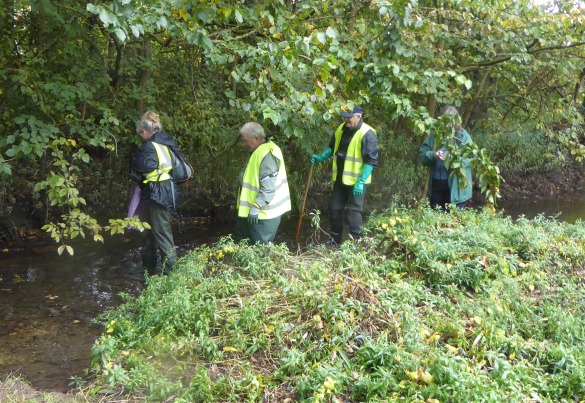 Sarah detected one burrow with recent markings by a reed clump which I shall need to keep an eye on. 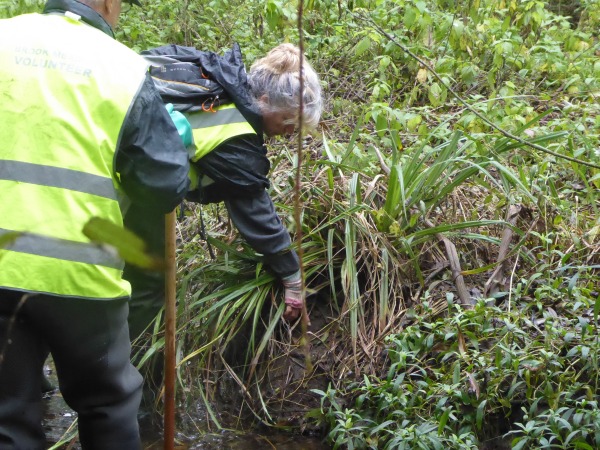 Water Vole survey – 17 July 2019
A Water Vole survey on the River Ems on Brook Meadow was carried out by Sarah Hughes (Community Wildlife Officer for Chichester District Council) assisted by Dan Mortimer, Terry Lay and Maurice Lillie. A good number of Water Vole signs were discovered in the area between the south bridge to the S-bend of the river, but none further north. 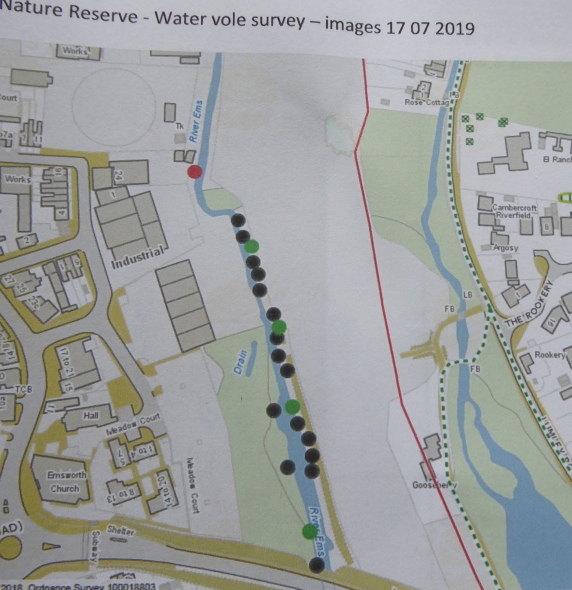 The signs included burrows, latrines and footprints, but no food larders.  They did not actually see any Water Voles during the survey, but the findings are very promising.   So please keep a special look out for any Water Voles, though the river and banks are not very easy to see at present from the footpaths.

Regeneration of the river banks – November 2018
Dan Mortimer has a plan to regenerate the river bank habitat for Water Voles and has made a start by planting Common Reed rhizomes near the north bridge. A small step in the right direction. 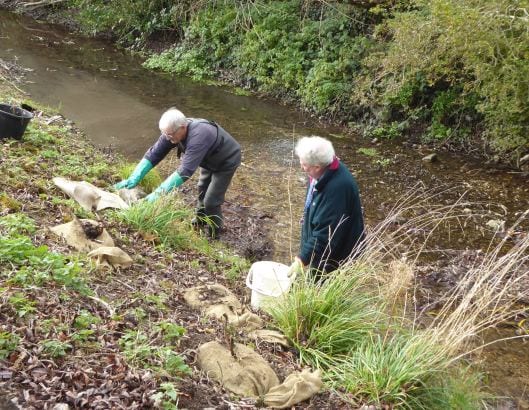 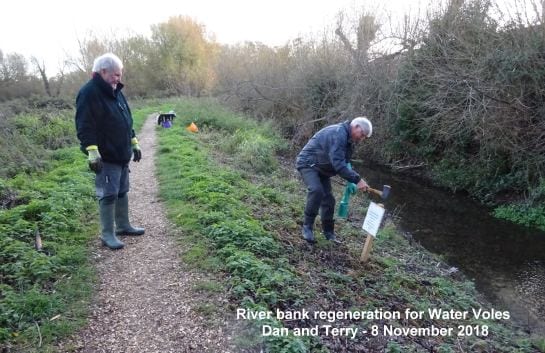 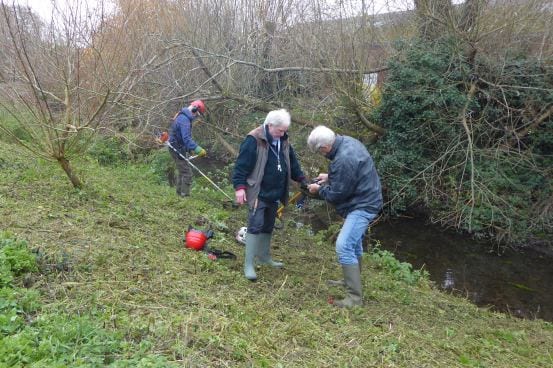 A view of the river bank from the north bridge in late November.  Great work! 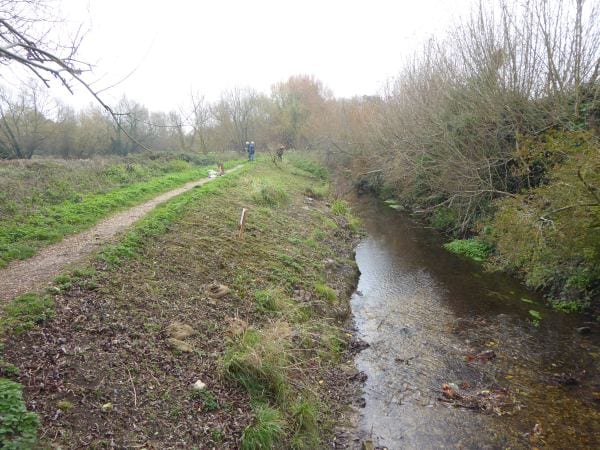 Revitalising the river banks – 23 March 2018
Report by Maurice Lillie and photos by Brian Fellows
The disappearance of Water Voles from Brook Meadow over the past couple of years is very worrying.  In view of the deterioration of the river environment and its banks, the conservation group has decided to try to improve the habitat of the River Ems for Water Voles. Volunteers have been actively clearing river banks and overhanging trees during regular workdays.  Further work has been carried out by outside contractors as detailed in the following report.
In a major effort to revitalize the river banks, Brook Meadow Conservation Group engaged the services of Hampshire Chestnut, in the shape of Phil and Stu on 23 March to close cut the east bank of the River Ems, from the southern end of centre meadow to the north west corner of north meadow. Here they are at work trimming off overhanging branches. 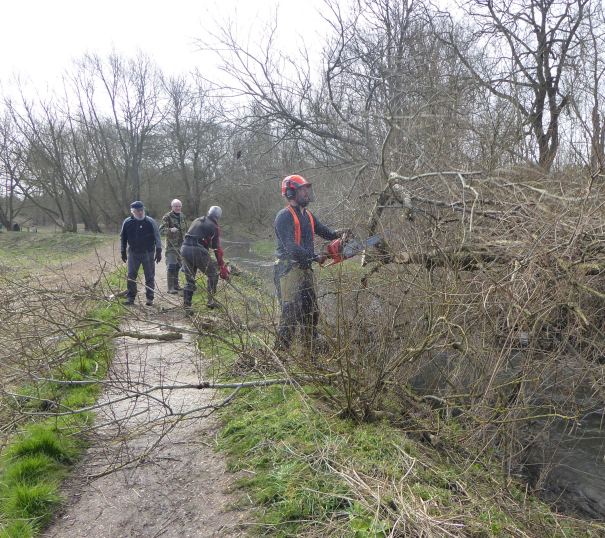 Video clip of the work . . . https://youtu.be/XjWFSVsDit0
The hard task of raking up the arisings was done by conservation group volunteers Phil, Terry, Maurice, Jennifer, Tony, Dan and Reg. 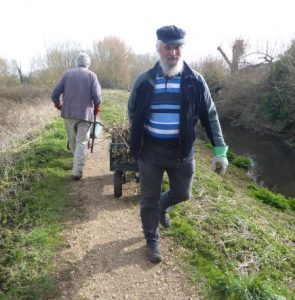 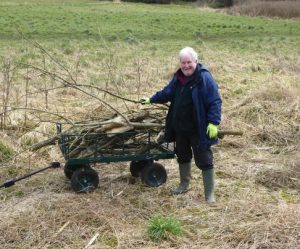 The grass and similar vegetation was loaded onto the carry sheet and dragged the rough terrain of Central Meadow to the sacrificial area in the south east corner of North Meadow. 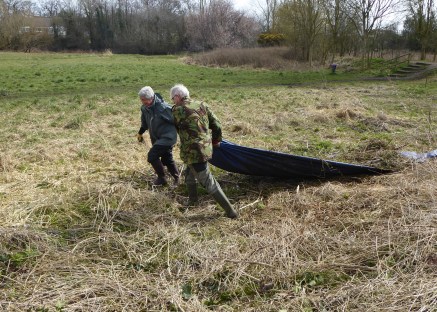 Phil and Stu were progressing well up the edge of North Meadow. This was a much more difficult section than earlier one, partly because the vegetation was far tougher, some of which had not been cut for many years and partly because the bank was considerably steeper. Phil also removed the ends of some of the branches of fallen tree that are due to be removed by The Environment Agency. This was to create sufficient access for the bank cutting. 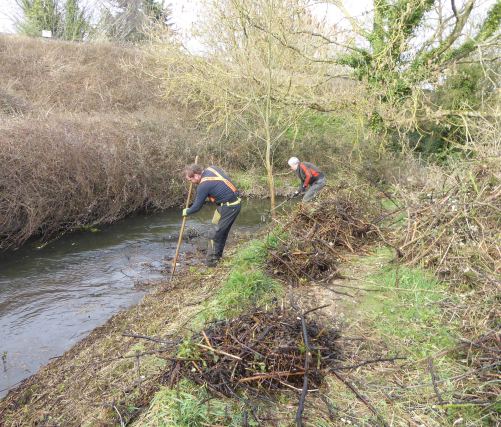 After a lunch break the volunteers continued to clear up the arisings Reg cleared the remaining tree parts in Central Meadow making good use of the cart. 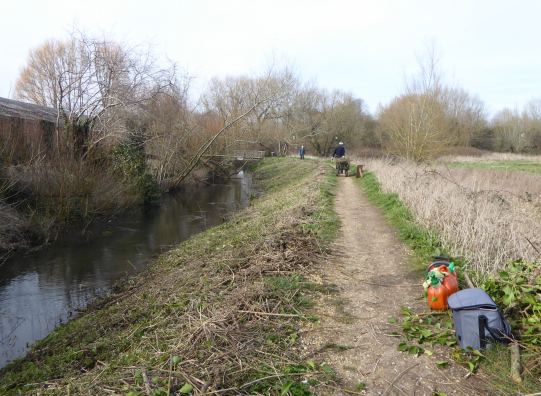 At 3.30 we decide to call it a day as the strenuous work was taking its toll. Phil and Stu had completed everything that was expected of them and the final push to clear away the debris will be the main task for this Sunday’s volunteer work session. A huge thank you to all the volunteers who helped to clear the debris and a similar thank you to Phil and Stu of Hampshire Chestnut Co Ltd for doing an exceptional job. 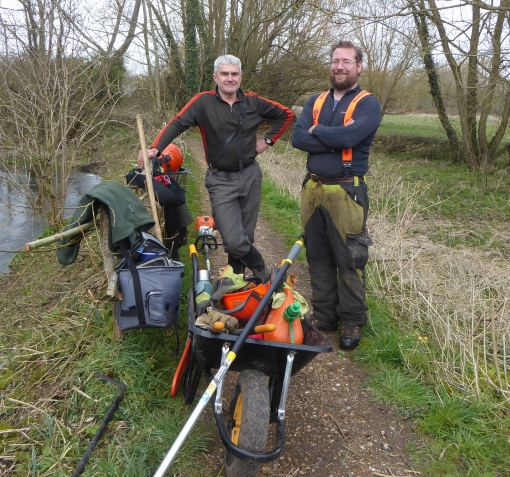 If you haven’t seen what has been achieved, already, I urge you to take a look at this first and vital stage of the revitalising of the Ems River banks to create a habitat that maybe, just maybe will lure our precious Water Voles back. 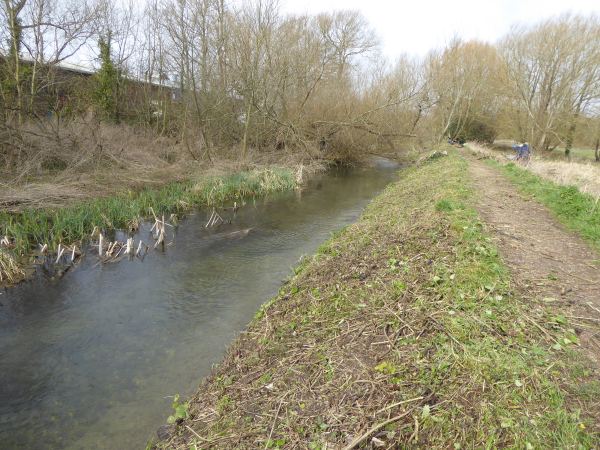 It was wonderful to be able to see so much of the river, much of which has been concealed for years. 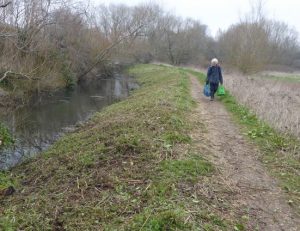 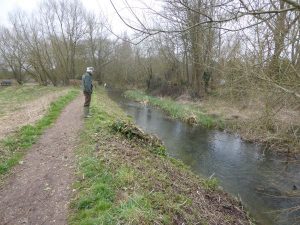 WATER VOLE CRISIS – Hampshire Wildlife Trust report – Feb 2018
Report by Brian Fellows – 26 Feb 2018
The disappearance of Water Voles from Brook Meadow over the past two years is reflected in the findings of a new report based on data collected over the last ten years by a network of experts from the Hampshire Wildlife Trust (Feb 2018) which points to a 30% decline in Water Vole distribution across England and Wales during this time. So, the decline over the past 50 years or so appears to be continuing. Although the new survey reveals a slight increase in distribution in recent years, thanks to some successful conservation efforts by The Wildlife Trusts and others, the full data covering the whole ten years paints a bleak picture.
Habitat loss, water pollution and massive building development have led to declines in the voles since the 1960s; exacerbated by predation by North American mink. The Wildlife Trusts and other organisations across the UK have made huge conservation efforts to restoring rivers and reintroduce the species, to ensure a future for this charismatic mammal.
The Wildlife Trusts are calling for Government and Local Authorities to enable the creation of a ‘Nature Recovery Network’, as set out in the Government’s 25 Year Plan for the Environment. This should be underpinned by a new Environment Act to protect, link and create areas of habitat which help wildlife move and spread out, benefiting Water Voles and a range of other wildlife. Funding should be increased to expand Water Vole conservation efforts including for landscape-scale restoration schemes.
We are doing our bit here in Emsworth on Brook Meadow by attempting to improve the habitat of the River Ems for Water Voles. Volunteers are actively clearing river banks and overhanging trees and further work is planned from outside contractors to complete the job. See report above.   Let’s hope we can once more see these lovely creatures living with us on Brook Meadow. 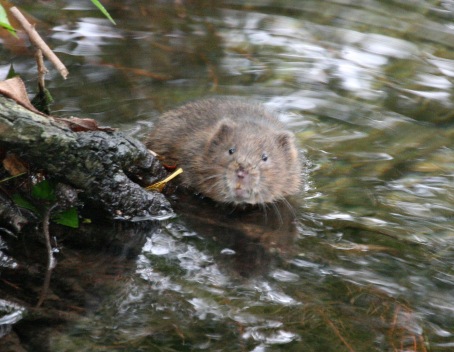 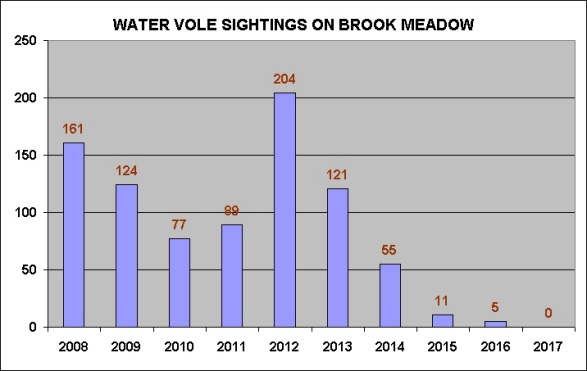 Our last Water Vole sighting was on 4th June 2016 in Lumley Stream.  The only sightings since then have been in Peter Pond.  So, they are still in the area, but not on Brook Meadow. 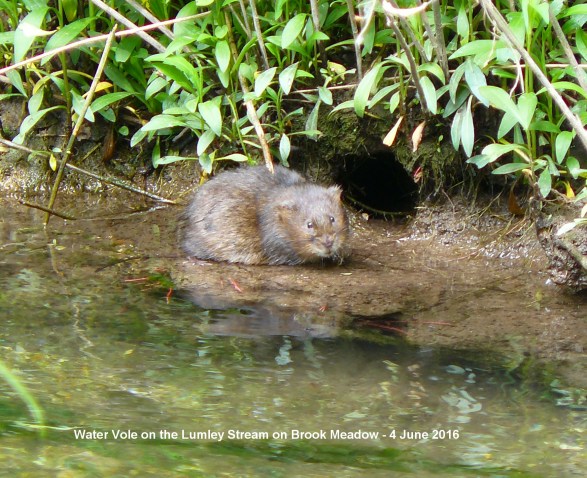 The Minx rafts installed by David Gattrell on Peter Pond have yielded nothing, so we can’t place the blame there. In his recent Water Vole survey Andy Rothwell emphasised low water levels in the river as a possible cause. The group needs to discuss this with the Environment Agency. Brown Rats are a constant threat, but they have always been here and to now seemed to have lived in harmony with the voles.
One major issue is the state of the river and river bank which is as bad as I have ever seen it in my 20 years monitoring the site. These two pictures taken from the same place illustrate the deterioration, the first in 2003 and the second last week. 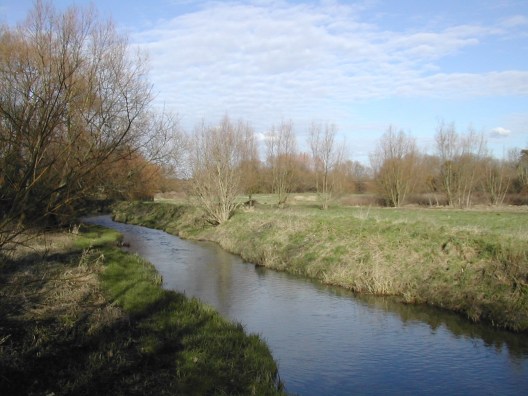 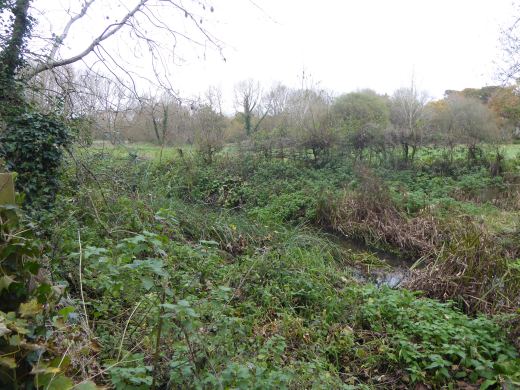 The group have made a promising start in clearing overhanging branches during in the section below the north bridge, but there is a lot more to do. 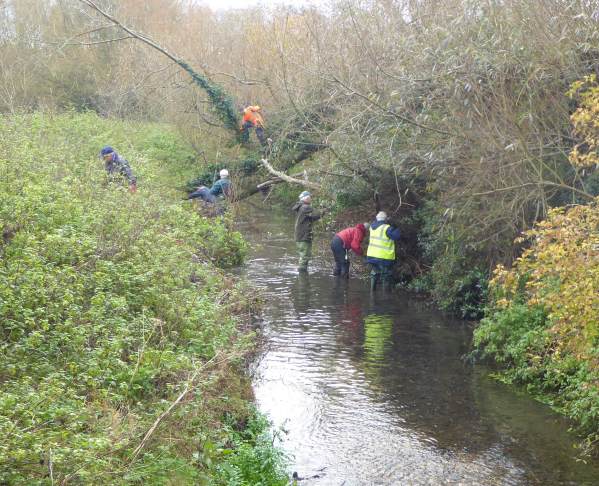 My recommendation is that we should use some of the money we have in the bank to employ contractors to clear the river banks and channel regularly each winter.

WATER VOLE CRISIS – 2015-2016
Water Voles have been an important aspect of the wildlife of Brook Meadow ever since the conservation group started in year 2000. We have carefully protected their habitat and monitored their population, but as shown in the chart below, sightings of Water Voles have fallen dramatically from a high in 2012 to a low point in 2015.  The situation did not improve and even fewer sightings were had in 2016 and none at all in 2017, apart from a few over on Peter Pond.

A recent survey by a professional ecologist – Andy Rothwell – found no signs of Water Vole activity anywhere on the main River Ems. But there were some signs of activity on the Lumley Stream on the east side of the meadow. So we hope some voles will move across to the main river. If not then we will need to consider other options such as re-introduction.