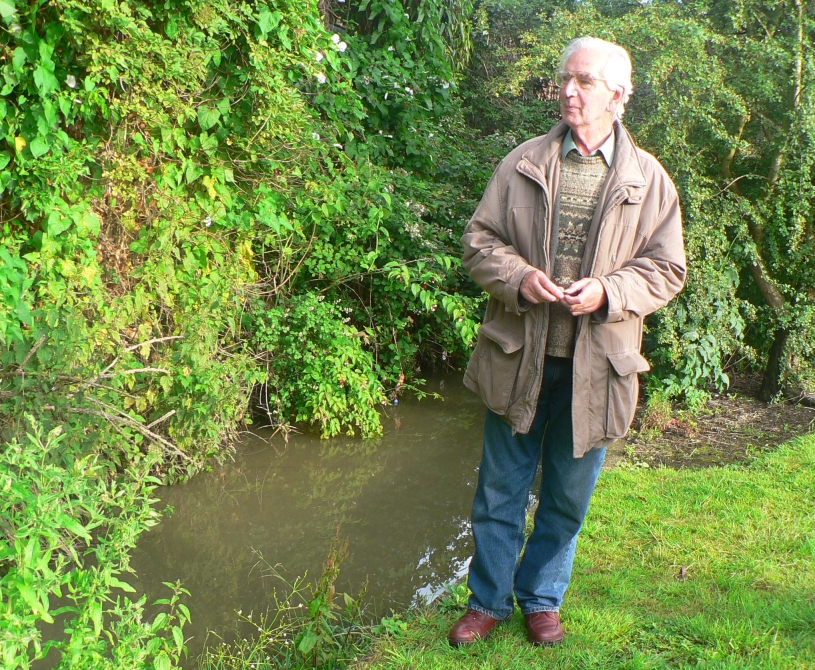 The news that Ralph had died aged 90 was very sad, but not totally unexpected. He had been poorly and had moved away from our local area in 2019 to live near his son in Castle Douglas, Scotland. Since then he had been largely out of touch apart from an occasional e-mail in which he told me about the birds, plants and various other wildlife he had discovered around his new home.   My last communication from Ralph was on 1st August 2020 in which he said he had started to build a record of the wildlife of the Carlingwark Loch area – sadly never completed.  Meanwhile, Ralph still had time to read and pick issues with my daily wildlife blog which he has done regularly over the years. He could be stern critic, but I truly valued and learned from his criticisms. Ralph, I do miss you

A remembrance service for Ralph Hollins took place at St Faith’s Church Havant at 11am on Friday 20th August 2021. His ashes were interred at Warblington Cemetery (extension) in his wife’s grave.

Ralph was an extraordinary and wide ranging amateur naturalist who kept comprehensive and daily records of wildlife in Havant and surrounding area and made them available through his website and nature notes. He was unique and we were very privileged to have him in our locality.

I have saved all Ralph’s ‘Nature Notes’ from 1997 to 2018 which are a wonderful treasure trove of observations, thoughts, opinions, etc. I thought it would be useful to publish these notes as an archive and a true memorial to Ralph’s passion for nature.  These notes disappeared when his own web site closed down.   See below for links to these diaries as pdf files.  Ideally, these notes should be held by the Hampshire and IOW Wildlife Trust.

On a personal level Ralph was my wildlife mentor and guru, as he was I am sure to many others. I retired from my job in 1997 and was very lucky to meet Ralph to whom I owe much of my interest in local wildlife and development as a local naturalist. He was a good teacher and convinced me of the value of communicating knowledge to others.   This led to me starting starting my own nature notes focussing on Emsworth.  Ralph was a devoted local patch naturalist and had an unparalleled knowledge of the wildlife in and around his home town of Havant. His range covered all aspects of wildlife, birds, plants, insects, mammals, etc.

I first met Ralph through the Havant Wildlife Group which he set up in 1995 with meetings on Monday evenings and nature walks on Saturday mornings, both run by him. In 1997 Ralph retired from the group, but we all carried on under our own steam. It is a testament to Ralph’s vision that the Saturday walks group is still active some 24 years later.   We all owe Ralph a deep debt of gratitude for opening our eyes to this wonderful world all around us.

I have kept up a special page on my web site for the Havant Wildlife Group (renamed Friends of Wildlife) and on it there is a brief history of the group featuring Ralph.
See . . http://familyfellows.com/hwg-index.htm

I don’t have many photos of Ralph but here is one I particularly like of him explaining some plant identification to Ros and Caroline during a Saturday morning walk in Bridge Road Emsworth in 2007. 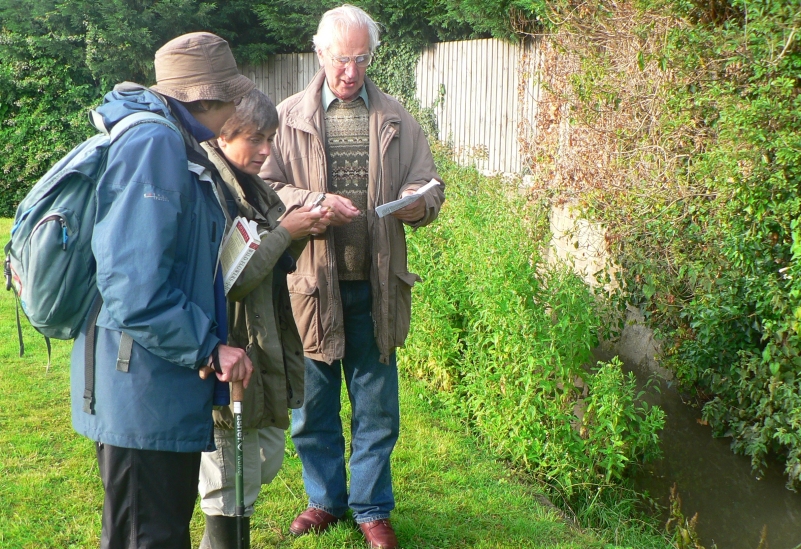 Ralph was always interested in my conservation work on Brook Meadow in Emsworth and gave me lots of encouragement. He made many visits the meadow over the years, particularly to study the great variety of plants that grow here. He was a great help in identifying stuff and made significant contributions to our plant records. I only have one photo of Ralph on the meadow – taken during a visit he made with John Norton and Eric Clements, two top Hampshire botanists on 4th June 2012. I think that was when John discovered the Slender Spike-rush. 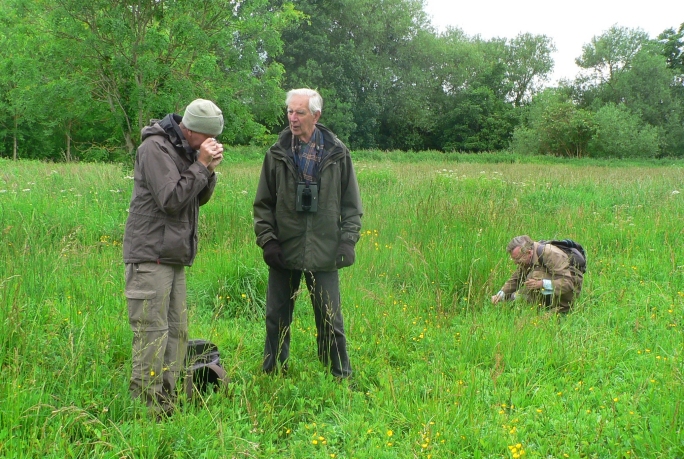 Here are some more photos I have of Ralph (he was never keen to be snapped).
This one shows Ralph at the site of the female Butterbur and Giant Butterbur plants on the Langbrook Stream on 17 March 2003. Are they still there I wonder? 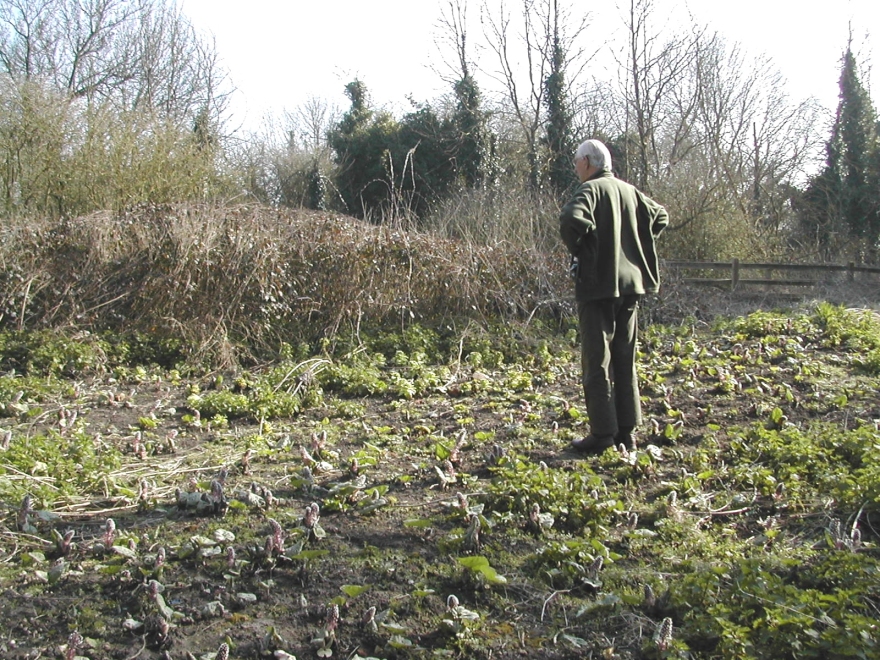 On the same occasion here’s Ralph examining the first Blackthorn flowers of the year. Ralph was insistent that we should not mix up Blackthorn with Cherry Plum, which always comes out first. 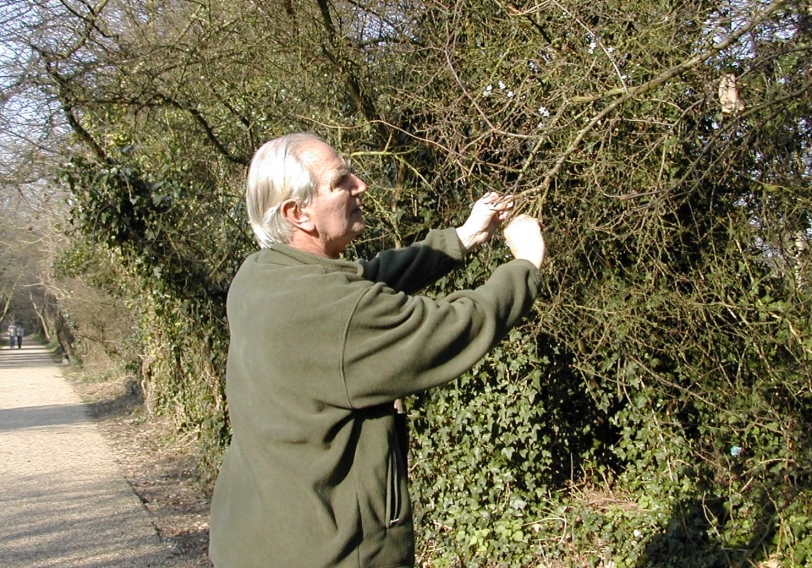 On 22 Sept 2006 I had a phone message from Ralph Hollins to say he had found a plant in Havant that he had never seen before and was not able to identify. He asked me if I would care to go over with him to look at it and take a photo which could be sent to Martin Rand for identification. Here’s Ralph with the plant which I think turned out to be Perennial Ragweed. I don’t recall having seen this plant ever again. 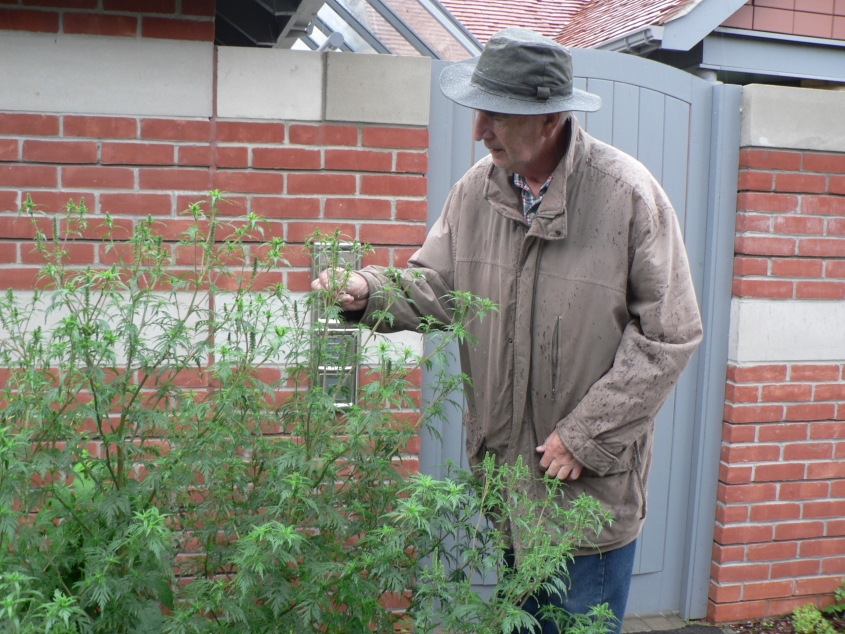 Ralph always insisted that you don’t have to go to nature reserves to see nature – it was all around you!   In fact, Ralph was never all that keen on nature reserves.  He admired plants growing in the wild!   In line with this Ralph specially praised plants that grow on pavements and his diaries are littered with records of the plants he discovered while walking around his home town.   Ralph has instilled the same interest in me which most people find very odd.

As might be expected Ralph did not have much time for twitching.   However, I vividly recall his discovery of a very rare bird called Lesser Sand Plover at Church Norton in August 1997 – a first for Great Britain. Ralph’s discovery attracted twitchers from miles around including the famous Lee Evans.   Most birders thought it was a Greater Sand Plover, but Ralph stuck to his guns and was eventually provided correct when the true identify of the bird was established from photos.

Here are some other appreciations I have received from other naturalists who knew the great man.

From Anne de Potier
Ralph used to say ‘let wildlife brighten your day’. He was the person who made that possible for so many in our area. He freely shared his knowledge, which was broad and deep, and full of the kind of detail that made facts memorable. He explained points of identification clearly and wrote in a lively, accessible way. His mission was to help as many people as possible know more about local wildlife, and to use facts and data to protect and improve our environment. I think I first met him when he started the Havant, Hayling and Emsworth Wildlife group (still going under a different name). As well as guided walks etc there was practical action – I like many others still remember counting and moving orchids at Southmoor. Later he joined the team as a counter for the wildfowl and wader counts in Chichester Harbour, and contributed very helpfully to the development of the methodology for the pioneering low and mid tide counts. This was where his experience and clarity of expression contributed exceptionally. He was meticulous in all his recording. His daily website diary and weekly Nature Notes were a ‘go-to resource’, and if anyone ever wanted to find something out or check a fact it was always ‘ask Ralph, he will know’. He was kind, patient and generous, and the results of his efforts can be seen and enjoyed now in people enthused and habitats safeguarded.

Heather Mills
It was when first attending a Wildlife class in Staunton school on a Monday evening that Ralph started that we met . He did not remain long but left it open for us to gain knowledge for ourselves and make weekly visits to all the wonderful wildlife spots in our area. We joined Ralph on one walk around Broadmarsh on a very cold, wet day and his enthusiasm never waned. I remember many times seeing him on his bicycle and the last time we met a few years ago now, whilst out and about, he had recently fallen off!! We had a lovely re-union at Nigel Johnson’s birthday celebrations, again a few years back.His knowledge of every aspect of wildlife was second to none. You could ask him anything and he would respond. He will be greatly missed by so many who had made contact with him after discovering his wildlife notes.

Fay Durant
As one of the original members of Ralph’s Havant Wildlife Group, I’d like to say how much I appreciated being introduced to the wonderful world of wildlife by this extraordinarily knowledgeable man. The fact our group is still existing, twenty three years after its conception, says a great deal for the enthusiasm Ralph instilled into us. He opened our eyes to the world around us and encouraged us to observe and learn.

Ros Norton
I knew Ralph Hollins from the 1970s when I joined the Hampshire Wildlife Trust. He led the local walks which I regularly attended. His wide knowledge of wildlife species was exceptional and I learned a lot from his walks and nature diaries for which I am very grateful.

Tom Bickerton
Sad news about Ralph, he always had time for me, even when he was whizzing by on the bike. I didn’t know him well, but he’d seek me out if he saw me. I think with him producing his Havant Notes that was an important step for Hampshire Wildlife, it got away from the usual twitching accounts that so many blogs adopt, and concentrated on what people could see locally and he’d give an explanation. Sometime that’s all you need, by increasing awareness of nature he promoted not only his love of species but passed on his knowledge to others.

Keith Betton
I have just been told that Ralph Hollins has died having recently reached 90. Ralph was important and enthusiastic recorder of wildlife. He was a prominent member of HIWWT in Havant. He led the Havant, Hayling and Emsworth local group for many years in the 1980’s and 1990’s and ran the Havant Watch Group.
Ralph was an extraordinary polymath who kept extensive records of wildlife in the Havant area and made them available through his website and nature notes. Many local people were inspired by Ralph’s love of nature. A sad loss.

Ian Julian
He wrote a blog before blogs, and it was always the best, full of intricate observations, questioning, love of nature, and illustrated how much of the natural world there is just in a local patch.

Peter Durnell
Very sad news. I saw a lot of Ralph when working on Hayling in the 1990’s always enthusiastic, a real ‘gentleman naturalist’ but with a modern twist.

Kevin Stouse
That is such sad news. I had the pleasure of working with Ralph at IBM and took part in some of his 24 hour bird treks round Hampshire usually in the rain. I suspect I won’t be the only person to credit so much of their knowledge to him. A great loss.

Ian Thirlwell
Very sorry to hear that. I first knew Ralph when I joined IBM in Havant in late 1969 where he was a legend to us computer newbies. It was always interesting browsing his nature notes and occasionally bumping into him out on walks, notably when the extremely rare Red Helleborine was rediscovered at a Hampshire location, doubtless to the envy of the county’s senior botanists! He’ll be missed.

Hilary Thomas
I can still see Ralph striding across Farlington on his long legs. He, personally and via his pupil, Kevin Stouse taught me to love birds. All those orchids he planted were also a joy. Thank you Ralph.