SOUTHERN MARSH ORCHIDS
The first two Southern Marsh Orchids were planted on Brook Meadow on June 17, 2007. They were donated by orchid expert Nigel Johnson who had grown them in pots from originals collected from the colony on South Moor at Langstone. Nigel said the plants would seed themselves and would multiply over time and he was right!
Here are the first two that were planted. This is how the flowers are now, handsome plants 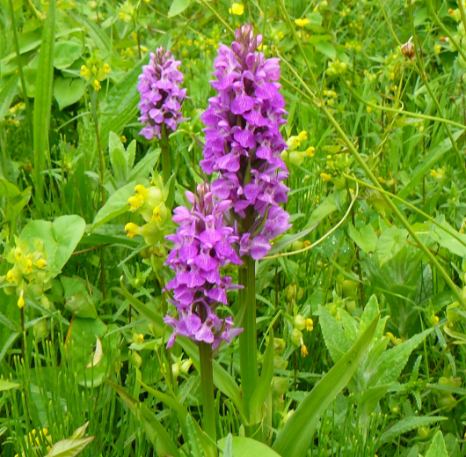 As shown in the following chart, Southern Marsh Orchids steadily increased in numbers from the 2 that were originally planted in 2007 to 36 in 2017.   Then in 2021 they went crazy shooting up exponentially to a massive 315.

COMMON SPOTTED ORCHIDS
Common Spotted Orchids tend to be pale, though some are dark and not easy to distinguish from Southern Marsh Orchids.  Their spotted leaves are the best way of identification.    Here is a particularly fine specimen with nicely marked petals. 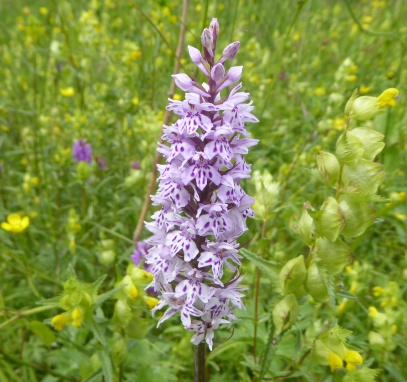 Southern Marsh x Common Spotted hybrid orchids – Dactylorhiza x grandis. We are grateful to Martin Rand (BSBI Recorder for South Hants) for checking our orchid counts which have overlooked hybrids between the Southern Marsh and the Common Spotted Orchids – called Dactylorhiza x grandis.  Martin says these hybrids can be quite common wherever there is a good population of the parents, as on Brook Meadow. Martin points out that the two orchids showed in the photo  below – which were labelled Common Spotted Orchids certainly have spotted leaves, but the flowers were more like those of Southern Marsh Orchids. 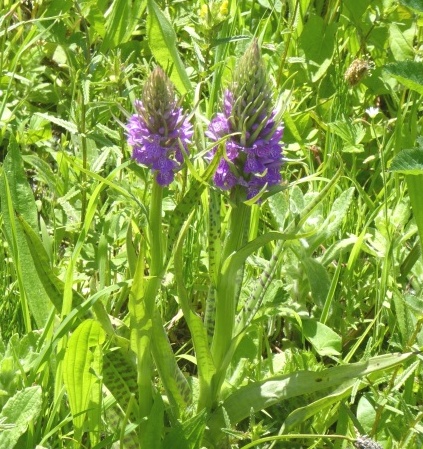 As explained above the increase in Common Spotted Orchid counts from 2017 can be largely  attributed to the growth of hybrid orchid numbers. The hybrids are larger and sturdier than the parent plants which makes them easier to pick out.  This is a shot of one of the bigger hybrid orchids. 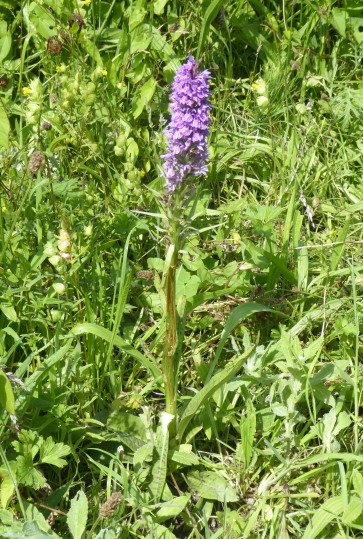 The following chart shows counts for the hybrid orchids  from 2020 when we first started counting them separately from Common Spotted Orchids.  Hope that’s clear!

BEE ORCHIDS
Bee Orchid counts vary from one year to the next, party due the growth of surrounding vegetation which sometimes makes them extremely difficult to find.  The plants are also small and have pale petals.  Some spikes have several flowers, like this example. 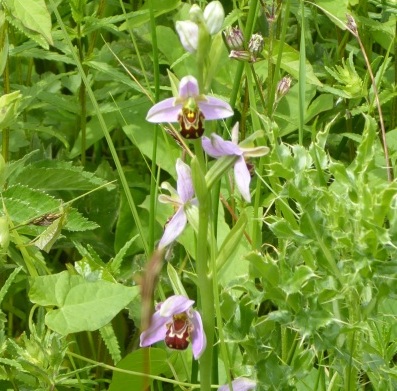 As shown in the following chart 2019 and 2020 were very good years for Bee Orchids, but numbers slumped again in 2021.  The big problem as always with Bee Orchids is finding them among the dense and fast growing grasses, etc.

PYRAMIDAL ORCHIDS
In 2020 we found two Pyramidal Orchids – one on the main orchid area for the second year running and a new one of the Lumley area.  Unfortunately, we failed to locate any Pyramidal Orchids in 2021. 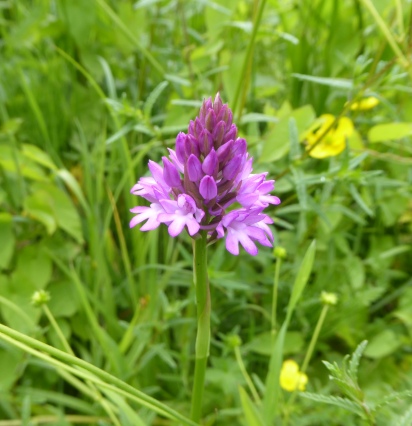