THURSDAY JULY 23 – 2020
There was just one juvenile Great Black-backed Gull on the pond when I arrived at about 12 noon with no sign of the other youngster or the parents. 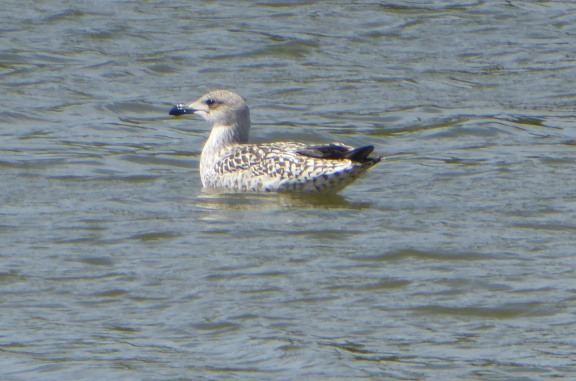 The juvenile flew off after a few minutes towards the harbour where I suspect the Great Black-backed Gull family are now located. All being well, the parents are likely to make occasional trips back to the pond to check out their breeding grounds, but twe look forward to seeing them again for their 10th year on the pond, though I fear the Slipper Millpond Association are planning measures to prevent further nesting of these magnificent birds due to their predatory behaviour!

FRIDAY JULY 3 – 2020
The Great Black-backed Gull family was on the centre raft – one adult and two juvenile. The adult flew up and half-heartedly ‘buzzed’ me as I was taking photos from the east side. 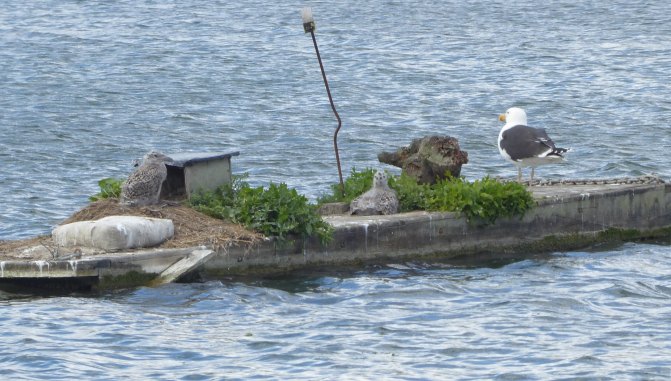 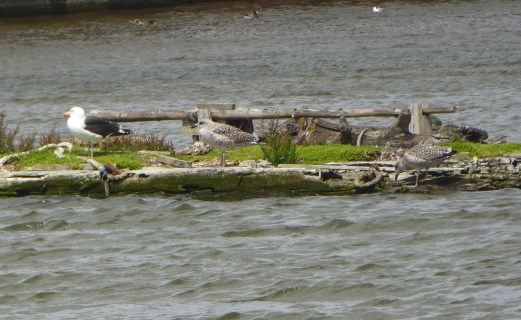 SATURDAY MAY 23 – 2020
I could only see one Great Black-backed Gull chick standing up on the south raft when I visited Slipper Millpond this afternoon. Later I met Pam Phillips on the meadow and she assured me that she had definitely seen two chicks standing up on the raft yesterday. So, when I got home I had a close look at my photos which revealed a second chick partly hidden in the nest box on the raft. You can just make out the second chick in this photo.

While I was taking photos, I was briefly ‘buzzed’ by one of the parent gulls which flew low over my head scolding me. This is normal behaviour from the gulls when there are young in the nest. Here is a shot of the protecting adult perched on a chimney. 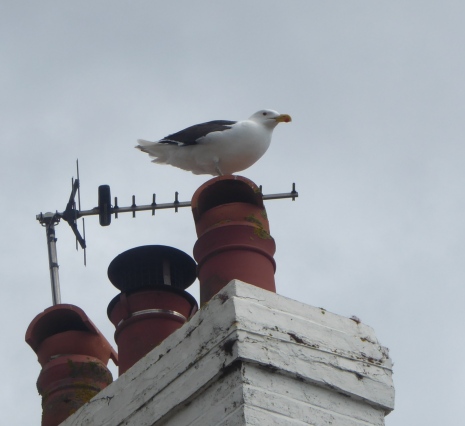 THURSDAY MAY 14 – 2020
The Great Black-backed Gulls nesting on the south raft have at least two chicks on the raft. There could be a third one hiding in the nest box, but I could only see two clearly. 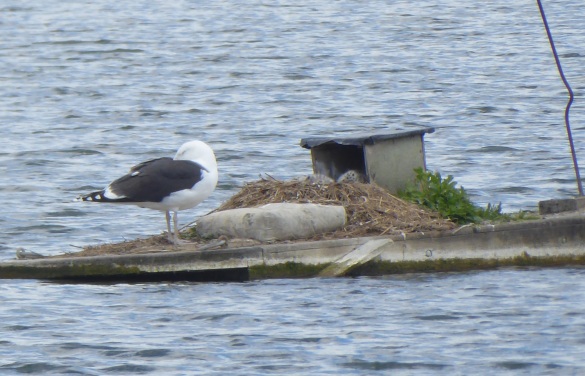 Thursday 2 April 2020
Pair of Great Black-backed Gulls are nesting on the south raft on Slipper Millpond with the Canada Geese on the centre raft as in previous years.

Friday 13th March 2020
Great Black-backed Gulls are now back on Slipper Millpond for their 9th year of nesting on the rafts. When I arrived at about 12 noon both gulls were on the south raft where they have nested for the past 3 years. Prior to that they nested on the larger centre raft, but were ousted by a pair of Canada Geese which nested there. So far, I have not seen the Canada Geese on the pond, though there was a pair last week on Peter Pond being pursued by the resident cob swan.

While I was present what I assume was the female gull flew to the centre raft to collect a beak full of twigs. She flew off with them probably heading for the south raft to start a nest. 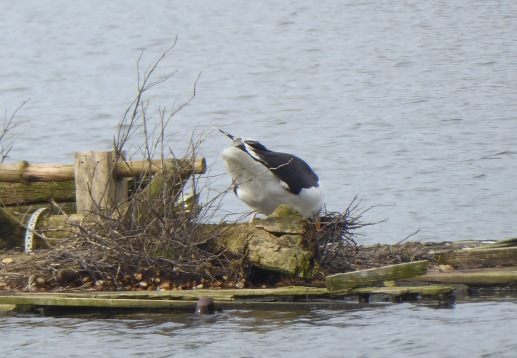 Monday 9th March 2020
I was intrigued to see the pair of Great Black-backed Gulls snoozing together on the centre raft on Slipper Millpond. This will be the pair that has nested on the pond for the last 8 years. For the past 3 years they have been ousted from their preferred nesting site on the centre raft by a pair of Canada Geese. It will be interesting to see if this happens again this year.