Here is a link to a list of British fungi along with help in identification
https://www.first-nature.com/fungi/index3fam.php

Dryad’s Saddle –  Polyporus squamosus
21-Jan-2021 – While walking through Palmer’s Road Copse I found the fallen Dryad’s Saddle fungus previously mentioned by Dan. It is at the base of a large Crack Willow tree from which it had fallen and immediately opposite the newly reinforced section of river bank. It is a large heavy fungus still identifiable as Dryad’s Saddle. I took photos of both the upper and lower surfaces. 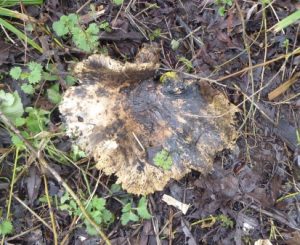 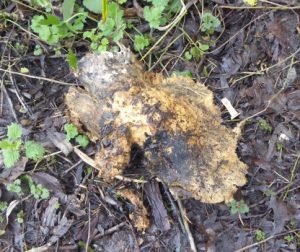 I recorded the last fresh Dryad’s Saddle on the west bank of the river below the S-bend in May 2018.  This is how it looks when at its best.  A truly magnificent fungus. 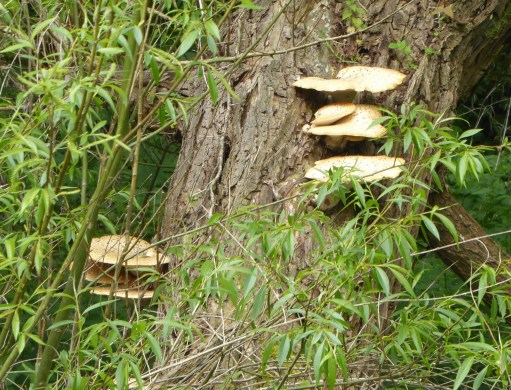 Artist’s Fungus – Ganoderma applanatum
15-Jan-21 – This is a tough brown fungus which is firmly attached to the end of a large felled tree trunk at the northern end of the path through Palmer’s Road Copse. It has been here for a long time, maybe years. 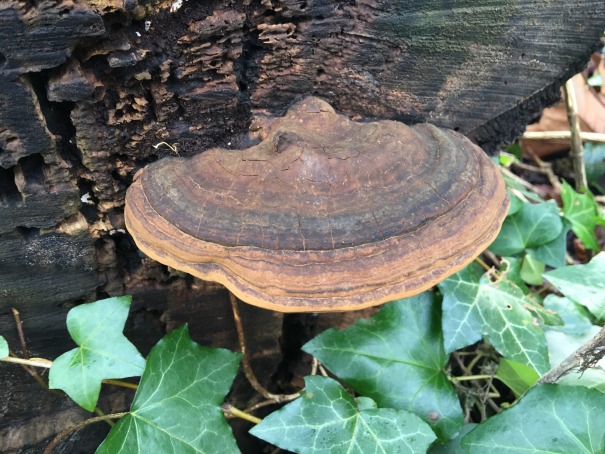 Artist’s Fungus is a tough common perennial bracket fungus which lives for many years, developing noticeable annual growth of ridges on the upper surface.   It releases spores in their billions in late summer and autumn which colours the surrounding area with brown dust. The underside is creamy white and can be scratched with a sharp pen to leave brown marks – hence the common name.

Turkeytail – Trametes versicolor
13-Jan-21 – Small bracket fungi arranged in tiers on a large log on the side of the north path (east end). This has been a regular fungus on Brook Meadow over the years, probably the most frequent of all fungi on deadwood logs. 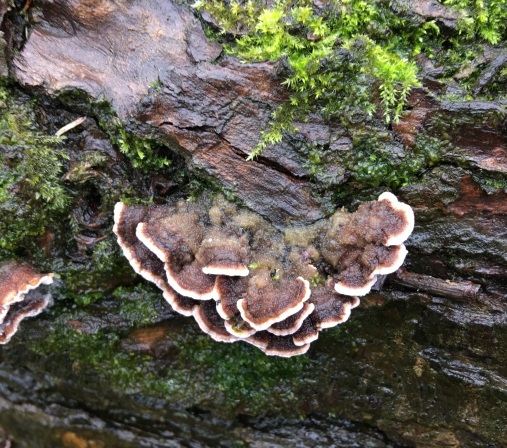 Turkeytail fungus (formerly known as the Many-Zoned Polypore) can be found all through the year, but it is most obvious in the winter months when deciduous trees are bare. This very variable fungus grows mainly on dead hardwood, including stumps and standing dead trees as well as fallen branches.
While the upper surface comprises concentric zones of red, yellow, green, blue, brown, black and white, the underside, which is covered in tiny shallow pores spaced at 3 to 6 pores per mm, is white or cream. The pores do not stain significantly when bruised.
This thin, leathery fungus attacks mainly dead wood, fallen or standing. It is most commonly found on hardwoods such as beech and oak, mainly as a saprobic (wood-rotting) fungus but sometimes as a weak parasite on living trees.
Very common and widespread across Britain and Ireland, Turkeytail fungus occurs also throughout mainland Europe, from northern Scandinavia right down to the Mediterranean region. This wood-rotting fungus is also found in Asia and is very common in North America.
It is from the USA that the common name Turkeytail (sometimes written Turkey Tail) originated and in Britain and Ireland has now largely replaced the formerly popular English common name Many-zoned Polypore.
The wide range of colour variations of this attractive and durable fungus have given it many uses; at one time it was even used as a hat decoration.

White Brain Fungus – Exidia thuretiana (New name = Myxarium nucleatum)
13-Jan-21 – A white jelly-like growth on one of the rotting logs in the cleared area on the south meadow. I considered slime moulds, until I came across White Brain Fungus. Shows best in wet weather in autumn and winter. Pure white when wet, drying to almost invisible. Occurs in most of Britain but in most areas it is uncommon. 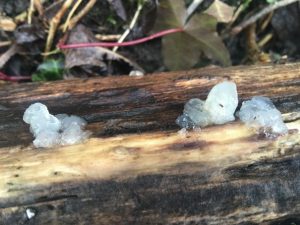 Candlesnuff Fungus – Xylaria hypoxylon
12-Jan-2021 – A cluster of black finger-like fungi with white tips – growing on one of the rotting logs on the cleared area in the south meadow. I considered Dead Man’s Finger, but the white tips were wrong. It was finally identified as Candlesnuff Fungus by the Mushroom Spotters UK group on Facebook. 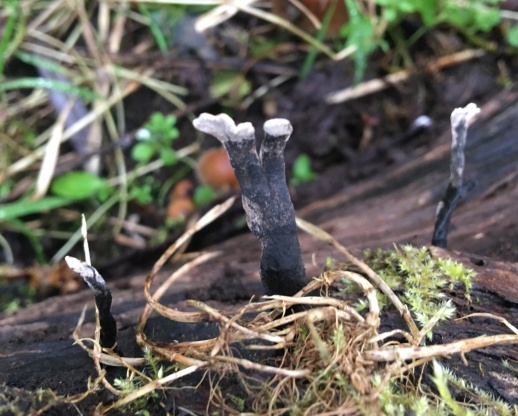 This white or greyish fungus is usually between 2 and 5 cm high, and soon becomes flattened and antler like in appearance, the upper branches powdered white most of the time. It goes on fruiting on stumps and fallen branches through late autumn and winter with white spores, then in spring it loses the white tips and sends out a different form of black spore for a few weeks. Common and widespread in Britain

Smoky Polypore – Bjerkandera adusta
06-Jan-21 – Small group of white fungi on a rotting log at the south side of the north path opposite a flowering Hogweed. They are probably Smoky Polypore. 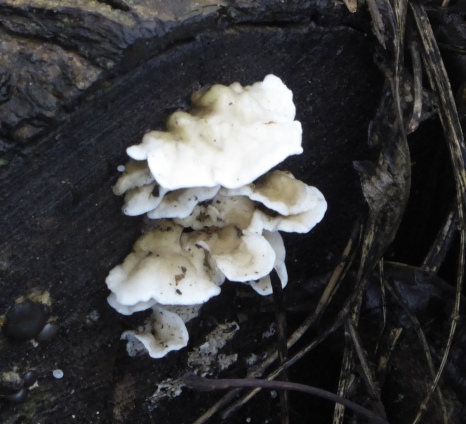 This is a wood rotting bracket fungus usually growing on fallen branches or on dead wood. It is usually seen in summer, autumn and early winter. It is very variable in shape, though it is recognised by its grey fertile surface.   The surface is soft and felty to the touch becoming rounded and concentrically ringed.   The common name ‘Smoky’ comes from the greyish colouring on an otherwise white cap.