The Emsworth Show is an annual event organised by the Emsworth Horticultural Society on Bank Holiday Monday.   This is a major local event which attracts thousands of visitors.  It has a traditional horticultural marquee with competitions for flowers and vegetables, art and crafts, photography and baking.  There are also arena events, dog, show, live music and over 100 stalls, including most of the local associations and conservation groups.    The Brook Meadow Conservation Group has a stall each year manned by volunteers to publicise the meadow and the conservation work undertaken.

EMSWORTH SHOW – MONDAY AUGUST 26 – 2019
Report by Brian Fellows and Maurice Lillie
The Brook Meadow Conservation Group had their usual stall at the Emsworth Show – this year at the New Life Church site on Thorney Road. This was an exciting new venture for the Emsworth Horticultural Society on a much larger site with plenty of car parking, but out of Emsworth. However, a 15 minute shuttle bus service was provided to and from Emsworth which lots of visitors (including myself and my wife) were pleased to make use of on such a hot day.
My main contribution was a bucket crammed with 21 species of wild flowers that I had collected earlier in the morning from Brook Meadow. I dropped off the bucket of flowers on the doorstep of Debbie Robinson who had kindly offered to take them down to the show ground. A big thank you should go the Brook Meadow volunteers who erected the stall and manned it throughout a very hot day. 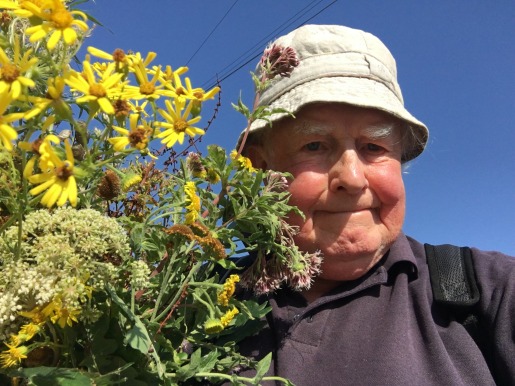 Maurice Lillie has written the following report of day’s activities with a few photos from me  .
“We had a really good day. I arrived shortly after 09.00 and David, Kathy and Debbie had started to unpack the gazebo and sort out the poles. At 10.30 it was erected and furnished with tables, chairs, display board, Brook Meadow banners, Kathy’s craft table and a fabulous collection of wildflowers that Brian had collected earlier from the meadow. 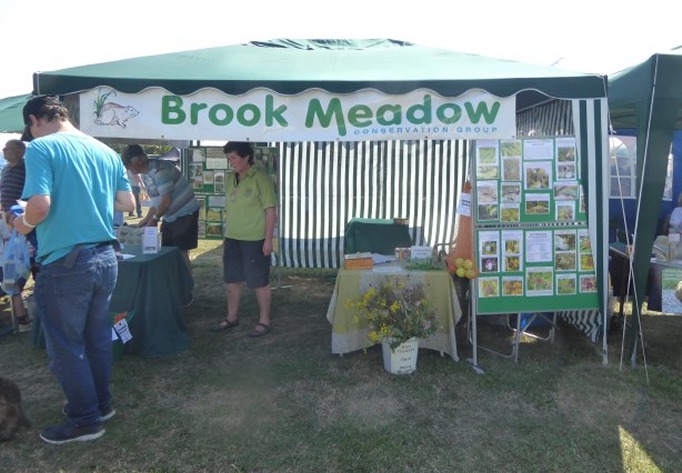 Dave McVittie had brought round 11 bags of 5 recycled tennis balls that he has been collecting up, hand washed and disinfected for sale. Dan brought loads of dog poo bags too.
Lots of volunteers attended to help on the stall, Tony, Terry, Reg, Brian and his wife as well as the above. Sorry if I have missed anyone. Pam was busy treasuring, I believe Colin was on car parking duty. Dave McVittie popped by to enquire after sales of balls and I was able to tell him that 14 found new homes. Dan also sold lots of his dog poo bags. Quite a few members renewed and some generous donations received.

Maurice, Tony and David keeping cool in their different ways 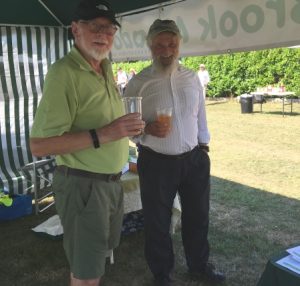 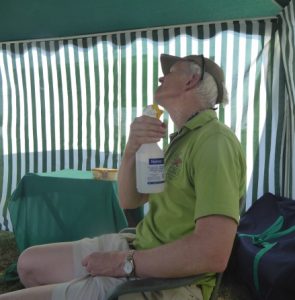 The butterfly creation activity was very popular.  Here is Terry looking at the displays with a visitor 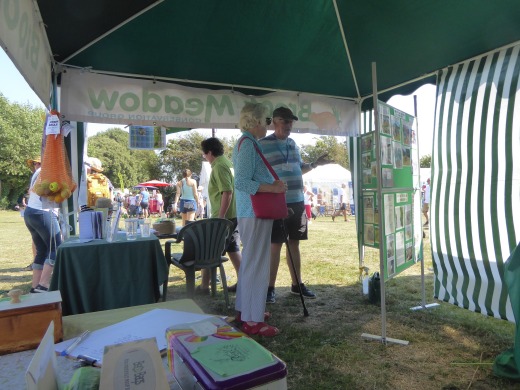 Finally, I cannot help but mention that my grandson Joe won a 1st prize for his photo of a Bumblebee feeding on Thistle flowers taken on Brook Meadow a few weeks ago.
PS – My photo of a Painted Lady sadly did not get a prize! 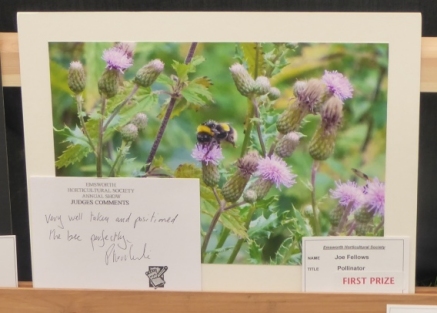 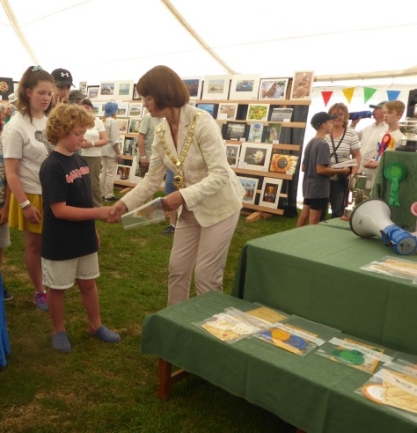 EMSWORTH SHOW – 27 August 2018
Report by Jennifer Rye. Photos by Brian Fellows
The day dawned grey and rather threatening, but our crack team of setters up were ahead of the game; having been asked to get there for 9 a.m., when I turned up on the dot, they’d already got the gazebo up and ready. All the constituent parts had been delivered by Pam, so thank you to her, Terry, Kathy and Debi. Augmented by the appearance of Debbie, David and Maurice, with the rest of the materials needed, we were ready for business when the show opened at 10 a.m. Here is David all ready and waiting for customers! 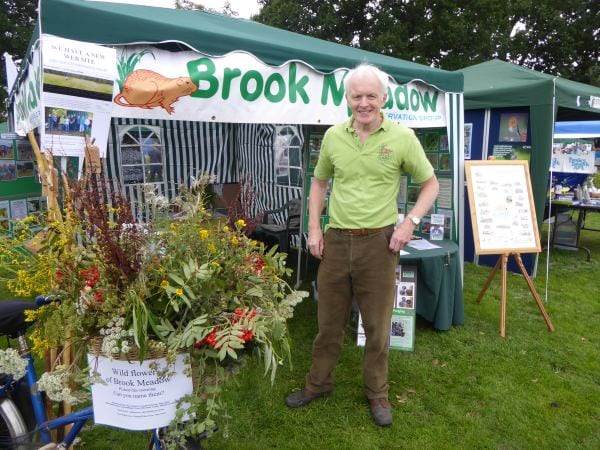 A steady stream of visitors to the stand all day followed. As usual, Brian’s bike with its basket full of seasonal colour from Brook Meadow parked in front of the gazebo took pride of place. 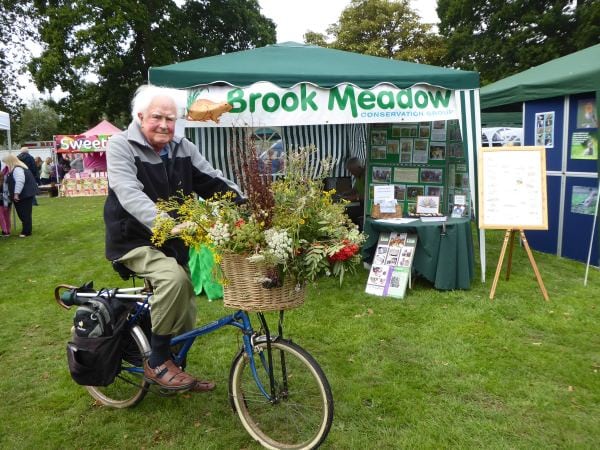 A number of people renewed their membership, made donations, and purchased bargain Christmas cards and biodegradable dog poo bags. 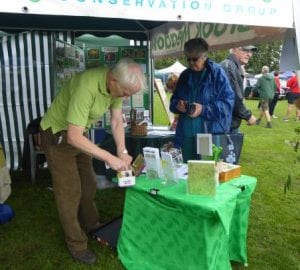 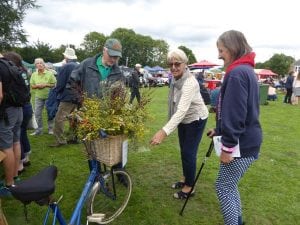 The photographic displays were studied by many people, and several newcomers and visitors stopped to make our acquaintance. 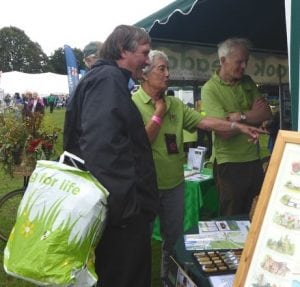 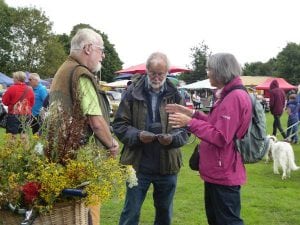 Most importantly, we were able to chat to like-minded conservationists, exchange information and share experiences. For example, enquirers from Hampshire Farm Group could talk bats with David, and be given contact details for the County bat recorder. 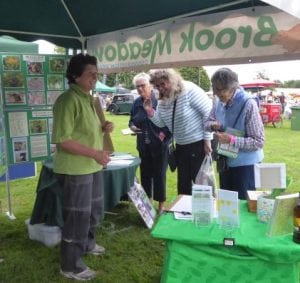 By the end of the day, we were all ready to pack everything away in half the time it took to assemble it, to get home and put our feet up. 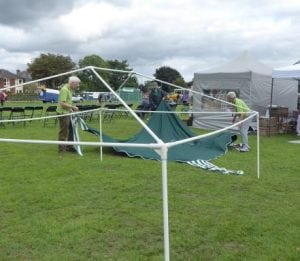 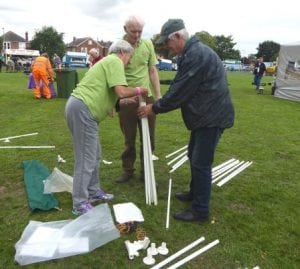 Many, many thanks to all who helped make it a success, despite the rather disappointing weather. But at least it did not rain, not a drop!

EMSWORTH SHOW – Monday 28 August 2017
The Brook Meadow Conservation Group had their usual stall at the annual Emsworth Show on Bank Holiday Monday. It was a perfect day weather wise with non stop warm sunshine. This attracted a good attendance and the Brook Meadow stand had a good flow visitors throughout the day to look at the fine display of photos showing conservation work on the meadow and the variety of wildlife that live there.   Many people also too the opportunity to renew their subscriptions while others joined for the first time.  Here are a few photos of the stand and the people manning it. 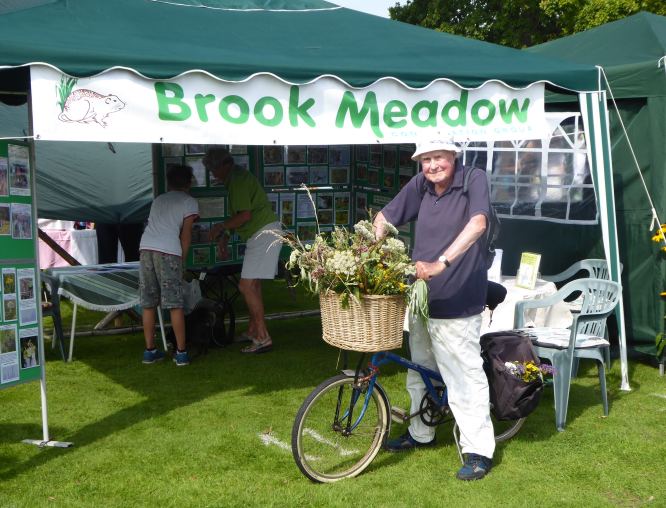 Maurice, Jennifer and David standing proudly in front of the stand 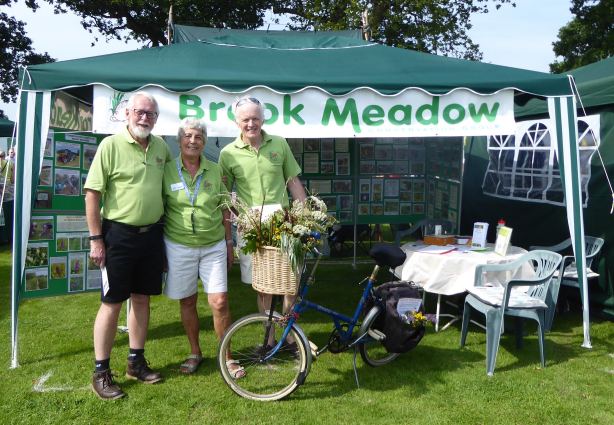 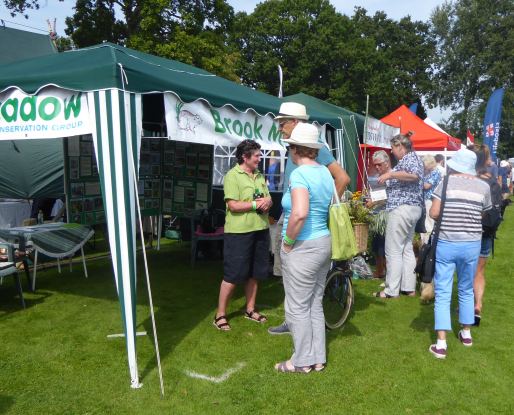 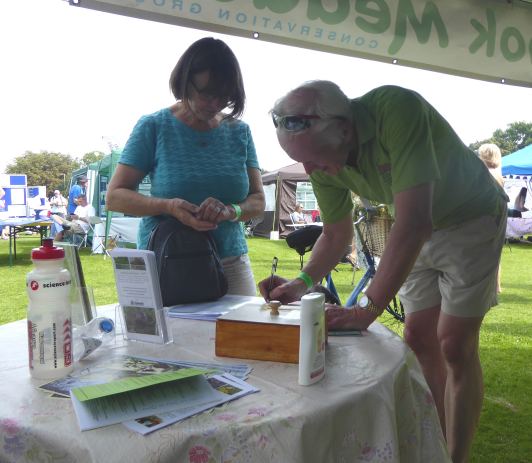 Jennifer discussing the work of the group with a visitor 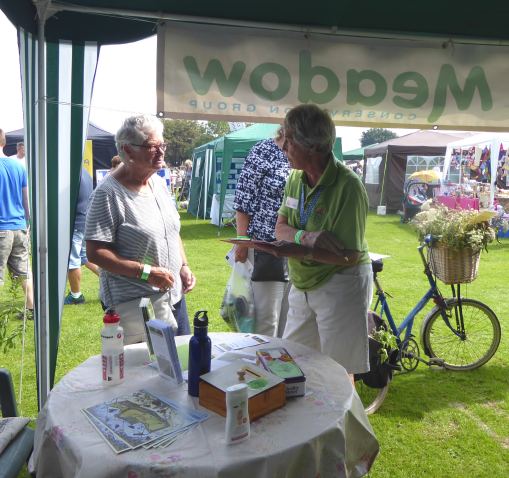