The Brook Meadow Annual General Meeting was held on Friday November 17th 2017 at 7pm in the St James Church Hall in Church Path, Emsworth. There was a good audience of about 30. 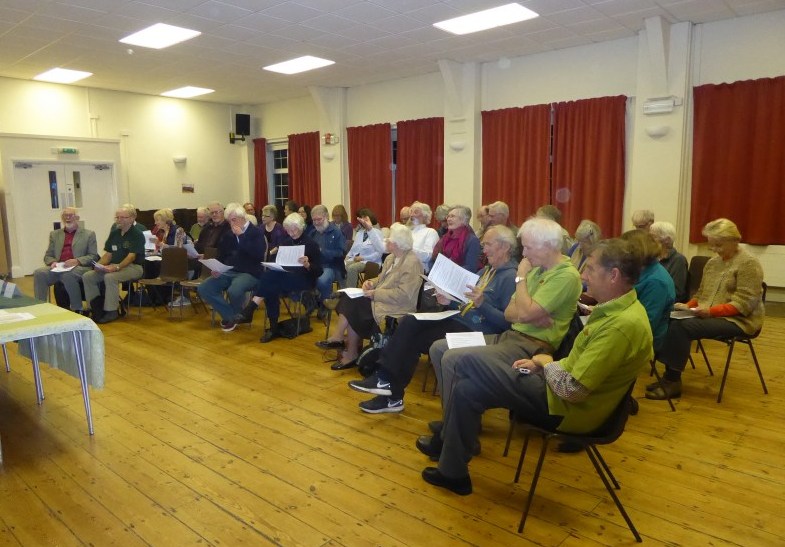 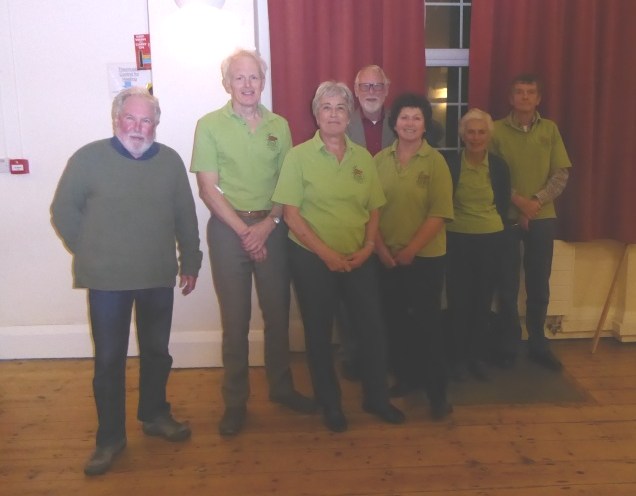 Brian Fellows then provided a review of the wildlife over the past year with slides.
The wildlife report is further down this page.
There was a refreshment break, followed by a talk by Hugh Milner, Chairman of the National Limewood Working Group.entitled ‘Ancient Forest’. 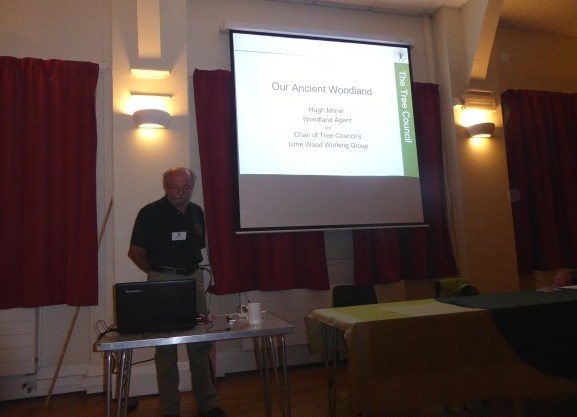 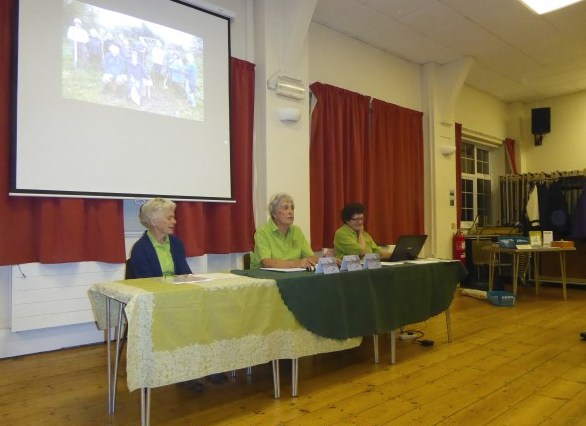 It gives me great pleasure to welcome you all here for the Annual General Meeting of the Brook Meadow Conservation Group, and to make my annual report. For the sake of clarity I intend to report first the things that have gone well this last year, to follow that with a précis of things that have been disappointing, and hopefully to wind up with an upbeat look forward to 2018.

The usual pattern of bi-monthly work mornings has continued, and interestingly there has been a slight change in attendance figures in that third Thursday morning has become marginally better attended than first Sunday: average attendance being 8.7 people for Sundays and 10.4 for Thursdays. Of course, the number of volunteers present impacts upon the amount and variety of work that can be completed. We have lost one of our leaders, Ian, but have been very well supported by the others. We have also been lucky enough to gain a regular litter picker, Brendan Gibb Gray, and with his help the whole meadow area is kept more or less free of litter, which is remarked upon by many users. We carried out a visitor survey in the summer, the first for some years, and found that footfall remains about the same: 186 adult visitors, 15 children and 87 dogs were recorded on a sunny Saturday in June.

The Girl Guides paid their usual summer visit one evening and completed conservation work under our instructions; the outgoing Mayor of Havant, Faith Ponsonby led a familiarisation walk through the meadow accompanied by Brian Fellows, and we welcomed a group of sixth formers from Bay House School in Gosport, who gave us a whole day of practical work as part of their ‘give back to the community’ week in their post exam weeks. They were a delight to have here, eager and helpful, and my thanks go to Maurice and Phil who helped to plan the work and supervised it to make sure that it was done safely and efficiently. We made it plain that we will be very pleased if they want to come again: 14 eager teenagers can get a lot accomplished!

Again on a positive note, we have continued to concentrate on the trees on the meadow, and a new subcommittee did a thorough survey. Following on from this, we were lucky enough to get Hugh Milner to come and advise us on an ongoing maintenance plan which has been added to our overall Management Plan. We share the work of tree maintenance with HBC and their Arborist, Andrew Skeet has been carrying out his own regular inspections and maintenance too. Another day’s work in Palmers Road Copse by our chosen tree surgeon, Mike Reed, we have paid for, and some maintenance has been done by our own volunteers where suitable. We have also employed a private independent chain saw operator with his own tools and public liability insurance. Disposing of the logs resulting from these activities has been made easy by our new policy of piling them near an exit gate with a Please Help Yourself notice – and people have!

More good news: we have installed a new oak bench in the north meadow, where you can sit and face eastward and admire our lovely peaceful meadow: this was made possible by a generous donation from the family of one of our regular volunteers who died last year, and it is known as Frank’s bench. It was made and installed by our own Dan Mortimer’s brother in law.

We have also installed a new Dog Splash Zone sign on the north bridge. Water voles are still sadly absent from the river Ems, though present in small numbers in the Lumley stream, but we have moved forward on this: we helped David Gattrell to buy and install a mink raft on Peter Pond, and the lack of any traces of them has at least eliminated one possible cause for their disappearance. More on this later.

Two more triumphs of the last year: a very successful hedge laying effort on the hedgerow we planted some years ago on the Seagull Lane boundary was one of the highlights of last winter, and we are very grateful to Mike Probert for leading this and teaching us how it should be done. The next third of the hedge we hope to lay this coming winter, leaving the final section for winter 2018/19.

Some members will know that we have introduced a new system of contact by email of a pdf copy of the paper newsletter which goes out quarterly to members who are not on email. This has been done by Colin and Brian in co-operation, so our grateful thanks go to them both.

Regular contact with all our members, more than 200 of them, is essential for the vitality and effectiveness of the group, and we could not achieve this without the faithful and regular work of both these important people.

I must now leave these accounts of the successes of last year, and address some of the issues which have been less heartening. As I reported last year, relations with the Environment Agency have been far from satisfactory. Familiar faces and names vanish, new members of staff are very elusive, and for all the efforts we make to keep in regular contact them, meetings have been few and far between. I think that Brian summed it up for me most accurately: “The clue is in the name,” he said, “ but all their efforts are having to be put into flood prevention rather than care of the environment.” We must blame national policy rather than individual members of staff.

As a result of this relative failure of communication, the management of the River Ems has been especially disappointing. We were promised a return to the formerly regular clearance of in stream and bank vegetation, which we know is vital to create viable water vole habitat, and it has not happened yet this autumn. It is a job which is not suitable for ageing volunteers, and most of our volunteers are over retirement age, apart from the fact that it is a statutory duty of the Environment Agency: if we undertake it ourselves, or buy in the necessary team to do it, should flooding follow we would be liable for damages.

We still live in hope that the EA will turn up; then of course, if they do so without first letting us know [which they have promised to do] we have no way of controlling the work they do so that it is sympathetic to our conservation aims, since they are mainly concerned to prevent flooding. We still hope to repopulate the river with voles, perhaps imported from elsewhere, and have explored the possibility of co-operating with the South Downs National Park team, who have had such success in re-voling the river Meon.

Another deeply frustrating failure of communication is with Norse, who are now the operational part of HBC for all outdoor spaces.The hallmarks of our relationship with them have been characterised by delay, failure to return calls, failure to communicate at all, and, on the rare occasions when we have managed to get them to do something, a standard of work that falls very far short of the required minimum. The repairs to the surface of the both bridges will do as an example: I am sure many will have noticed how delayed that has been [2 years and counting] and the shoddy workmanship which has meant that our volunteers have had to complete repairs that were left in a dangerous state for bridge users, with loose boards, nails and screws left proud as flagrant trip hazards, and so forth. The sadly unsatisfactory cut of the central and north meadows is another miserable example.

We are grateful for the efforts made by Brendan Gibb Gray to mediate towards a better relationship for all the green spaces in Emsworth with their new “partner” Norse, and with Rivka Cresswell, our newish Councillor for attempting to bring pressure to bear.

One last disappointment was the late stage cancellation of an expected arrival of more translocated reptiles from a building development in Pagham, as Pagham Parish Council decided that their reptiles must be kept on site during the building period. Whether that is in the best interests of these reptiles we rather doubt. Monitoring this year of numbers of surviving reptiles on the meadow from previous relocations has been very positive, they are evidently not just surviving but breeding in their new home.

Income was lower this year as the previous year was exceptional. Although membership subscriptions are down, donations continue to be generous. The donations received in memory of Frank Styles have since been used to purchase a new bench on the Meadow.
Sales of Brook Meadow Christmas cards resulted in a good profit.
Just one Premium Bond win of £25 this year.
There were no major items of expenditure. A mink trap was purchased for use on Peter Pond to detect any unwelcome visitors. The programme continued to pollard trees in Palmers Road copse.
A surplus of £968.19 is carried forward to the balance sheet.

WILDLIFE REPORT for 2017 – by Brian Fellows